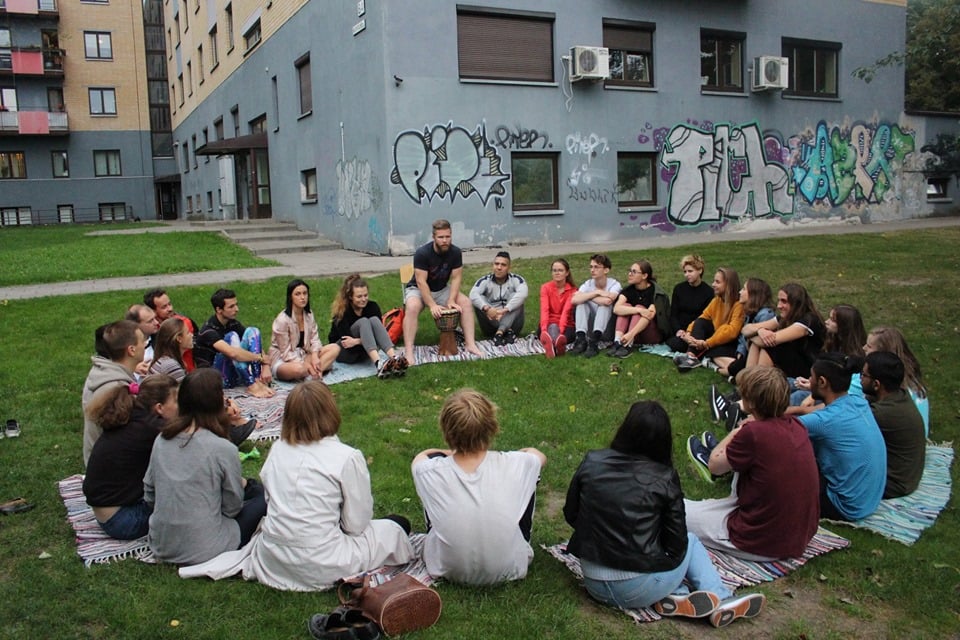 Over 24 young people gathered to the first Capoeira workshop hosted by Vilnius Antakalnis open youth center “Žalianamis”, during which both our local youth center visitors, as well as the international youth community and the participants of the intensive CAPOEIRA CONNECTS COMMUNITY 1-week long training came together. Some of them joined out of the curiosity about this unique martial arts dance which originated in Brazil, others were brought along by their friends, and some simply wanted to join the workshop as a means of exploring this new activity which was born out of a genuine collaboration between two youth organizations – Active Youth Projects and Žalianamis – atviras jaunimo centras. The friendship which emerged throughout the projects “Capoeira Connects Community” training program in Kaunas, developed into a combination of multiple youth communities within a small, wooden house painted in green not far from the Neris river in Antakalnis. It was precisely here in this unexpected place, during a particularly windy evening that a lot of young people gathered led by an energetic Capoeira instructor Audrius Kiuberis from “Kaunas Capoeira” and began coming together by singing Portuguese songs. In the beginning this required a lot of courage and effort for many in order to overcome ones inner “obstacles” and to dare liberate one’s voice chords in order to sing the words of an exotic language, however as a collective everyones confidence grew with increasing mutual support of one another. And that is exactly what “Capoeira” teaches through practice- VALUES – the basis of which are to not be afraid of being yourself, to not be afraid of making mistakes, to enable and empower each other through support, and as a result to become stronger and grow together.

Although at first glance it may seem that “Capoeira” is simply an intense physical training, and that “Capoeira” dancers are dangerous acrobats, nevertheless, the essence of it is the sense of community and the all-encompassing force referred to as “axe”, rather than combative aggression. Audrius Kiuberis, like any good teacher to whom its important to maintain a balance between firmness and openness, teaches young people discipline and order during the class, but also mutual respect. And that is particularly important, especially when these days young people can no longer be forced into submission to a deemed “authority figure” – this generation demands that their respect and attention be earned without fear but with the ability to inspire them. Hence, Capoeira teaches not only specific movements with which one can then learn to express themselves as if from a diverse vocabularly during a dance with another player within the bound of a circle of people called the “roda”. Capoeira teaches social skills and helps people overcome social barriers, especially in this age when most tend to isolate themselves both physically and emotionally, by shifting their lives onto social platforms on their smart phones. And this first workshop is a living proof that it takes less than a few hours in order to discover an authentic connection with others, when we concentrate our attention on what we have in common rather than what makes us different. Each and everyone of us wants to be seen and understood, and probably every one of us is afraid to fail or to make a fool of themselves in front of others, which is what often stops us from simply being “ourselves”, however during such activities as “Capoeira” we manage to remember that we are not alone, and that we can develop together if we dare to throw down our social “masks” and to meet each other as equals.

How Capoeira Can Teach Us Tolerance?